This is a scratchy and raw note about QEMU and KVM. It has some links to various posts. It has some sentences trying to explain how QEMU interacts with KVM, and some code snippets from both QEMU and Linux kernel KVM modules.

Honestly, I didn’t fully understand the whole QEMU/KVM thing the whole time, until I decided to take a deep tour recently. End of the day, I’m satisfied, mostly. I now know how QEMU invokes KVM, how KVM launches guest, how KVM handles vmexit, and vmexit translates to userspace-visible `KVM_EXIT_REASON` and so on, all in concrete code pieces. More importantly, I dive deep into how the device is emulated. More specifically, IO and MMIO emulation. It's super interesting but really fundamental, I strongly recommend the QEMU blog explaining the device emulation.

Device emulation is costly, that’s why Amazon use Nitro to offload now (not too much tech details available online)! VM can use IOMMU to have exclusive access to a device, the IOMMU ensures memory safety, and optimizes the interrupt-to-cpu delivery. SR-IOV improves scalability, it makes a physical device appear as multiple virtual devices. Combing SR-IOV and IOMMU, each running VM can have exclusive access to a virtual function, no VMM involved, even if there is just one physical PCIe device. Note that, a) IOMMU can be used without SR-IOV, that means a physical device can be used by one VM only, b) in theory, SR-IOV-capable device can be used without IOMMU, as long as the guest VM can see host physical address. However, the usual practice is always use SR-IOV with IOMMU, thus it can translate guest physical address to host physical address.

(If you want to develop a hypervisor, or a VMM, most likely you can find codes and references in the following projects. )

This section walk through various bits on I/O virtualization.

In this section, I want to take a tour on how QEMU works without accelerators like KVM. I think at this point we already know the basic designs. Hence this section will focus on code details. (Added on Jun 19, 2021.)

For QEMU, KVM is a kind of accelerator. By default, QEMU uses binary translation. With KVM, QEMU is able to run native instructions. To do so, QEMU must interact with the linux kvm via ioctl. Also, with KVM, the device emulation flow is slightly different as it would trap to host kernel then bounce back to usespace QEMU.

Also note there are many examples demonstrating the KVM flow. QEMU-KVM is one, the rust-virt vmm is also one. Generally this is where you should start from if you want to write you own virtualization.

I think when you start QEMU, you can choose if you want to use `virio` or `vhost` as the network/block/etc devices. QEMU will use `vhost` accordingly, i.e., use the host’s `/dev/vhost-xxx` interface.

IOMMU can be used for virtualization or non-virtualization cases. If a device is directly assigned to a guest, IOMMU must be used, because we need to prevent the guest drivers from corrupting arbitrary hypervisor memory.

The BIOS presents IOMMU related information via the ACPI DMAR tables. The Linux IOMMU driver will parse the table and build necessary stuff. The whole linux intel-iommu.c follows the Intel VT-d specification, i.e., setup Root Table, Context Entry, and talk with IOMMU via MMIO register access. The IOMMU is involved in every DMA related operation, because it needs to prepare the page table entries.

IOMMU can also be emulated. QEMU can emulate an IOMMU for the guest, so the guest linux can also run its intel-iommu code. The emulation is done similar to other MMIO emulation techniques. (See the following QEMU vIOMMU link for why we need this)

Intel IOMMU is very flexible. Each device can have more than one associated address space, presumably each client VM can install their address space onto a device. In addition, the IOMMU can translate from not only gPA, but also gVA (think about RNIC in virtualized usage!), and some others. This is described int Intel IO-d spec:

Remember dma_map? I have implemented in LegoOS, mainly for IB’s needs. At the time of implementation, I’ve only implemented a pci-nommu version, that means the dma_map is barely just doing a “kernel virtual address to physical address” translation, that’s all, no additional setup. The code is here: https://github.com/WukLab/LegoOS/blob/master/arch/x86/kernel/pci-nommu.c#L50

Linux has the real IOMMU-based dma_map and dma_unmap. Ultimately, it uses the dma_map_ops, from linux/intel-iommu.c at master · torvalds/linux. I took a brief read of the code, it’s my understanding that the code is following the Intel VT-d specification. More specific, this intel-iommu.c source file will:

For Linux, there are multiple dma_ops: nommu, iommu, and swiotlb. If Intel IOMMU is not present in the ACPI table, usually the swiotlb is used by default. SWIOTLB is like a bounce buffer, I don’t really get why it is the default. LegoOS has the nommu version, which really does nothing.

So when you enable pass-through and expose a device to guest this is what happens:

One thing I still don’t understand: (Answer below, in VFIO section)

virtualization. It is to let application programs(running in guest)share their

QUESTION (see paragraph above): It seems RDMA/GPU cards can both use this feature, right? But I’ve never seen anyone mention this before. My impression is always that RDMA/GPU cards will do their own GVA to GPA translation and not care whether there is iommu present.

Now the question is to find out who is actually using this nested IOMMU translation.

The Intel vt-d spec talks about Device-TLB. As its name suggests, devices can cache some entries in their chip! There is a protocol between the device and IOMMU.

Do note, this is totally different from RDMA/GPU’s own VA->PA translation facility.

This one is IOMMU specific and is generic to all devices who want to use it. And it seems it is used for the nested translation above (gVA->hPA).

Funny that I missed vfio in the first place, such a critical piece. vfio exposes device’s configuration spaces to the user space (via mmap of course), so that people could run user-level device drivers!

To understand that, you first need to understand how the driver talks with the device: PIO, MMIO, interrupt, and DMA. The most important thing of course is MMIO (assume PCIe devices): Interrupt/DMA will happen because the driver touched the configuration space in the first place. Vfio exposes the PCIe configuration space to userspace, so that people can write a device driver just like they have done in kernel space.

But, a DMA-capable device is able to write to anywhere. That’s why we need IOMMU, that’s why within the kernel, virtio subsystem is closely bound to the IOMMU part.

The use cases of vfio are straightforward. Both of them need to directly access device:

Note that QEMU itself has valid VA-PA mapping to access the physical device configuration spaces, which was established via mmap and ioctl. When QEMU launches the guest, it will expose this part of VA to the guest OS, thus when guest OS tries to access the physical device’s configuration space, it will just through without any EPT VMEXIT. (The mechanism should be: qemu will register the PCI device’s memory region via its memory_region_init_rw() API, which will finally ask KVM to setup the ETP pgtables)

As for the IOMMU mapping, QEMU will use ioctl to ask vfio driver to install the mappings. I think QEMU will simply map all guest’s memory (gPA -> hPA), so whatever gPA is used by guest device driver, IOMMU has a valid PTE. Wow, this actually solved my concern!

(the assumption is QEMU allocates the guest memory during start, i.e., just eager-allocate all memories. Is this true?)

The usage of IOMMU is really smart here. Even though the user app can use ioctl to ask vfio kernel driver to setup some mappings, the user app is only allowed setup pages belong to itself! Thus IOMMU is safe, thus DMA is safe, thus the whole “userspace device driver” is space.

As for other interrupts, it says it was implemented as a file descriptor+eventfd. Sure, shouldn’t be too hard. :p

Well, most QEMU/KVM device emulation is samecore, right? For instance, the serial device is definitely samecore, as you can see from the above QEMU/KVM code flow.

We also know that QEMU has some worker threads. The “main” thread will offload jobs to them, and the jobs include I/O related stuff, right? So maybe the state-of-the-art QEMU is already doing both samecore and sidecore emulation?

Well, it depends on how you define “sidecore emulation”, I guess. If it means “avoid vmexit” at all, then it’s slightly different.

The latest in this design space is to use dedicated hardware for IO virtualization, like AWS Nitro and Microsoft SmartNIC.

The device exposes a unique partition/MMIO to each guest. Guest sees a passthrough raw device. Within the device itself, there will be stack handling necessary virtualization tasks. These tasks are similar to what QEMU was doing. 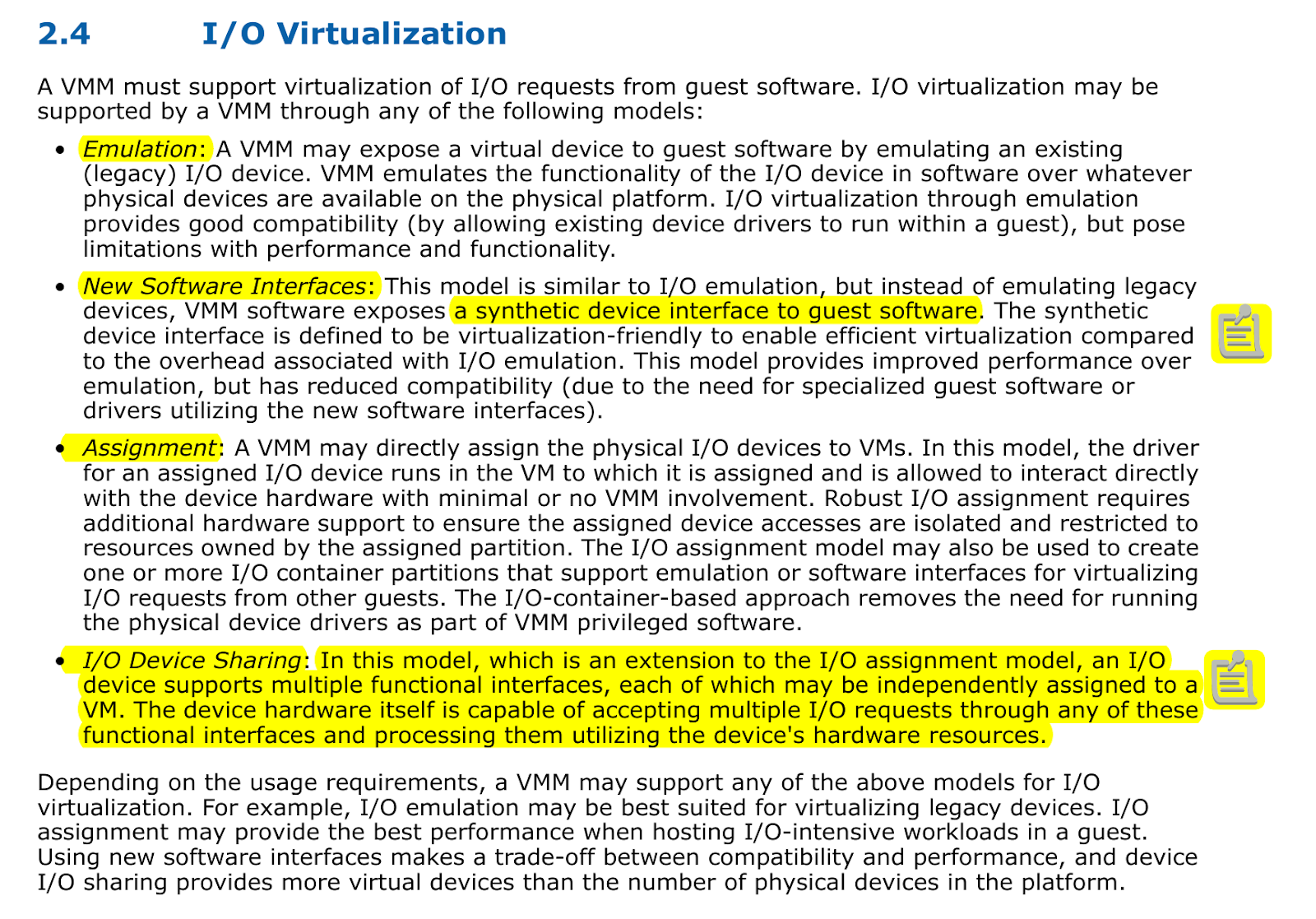 How to use KVM APIs: 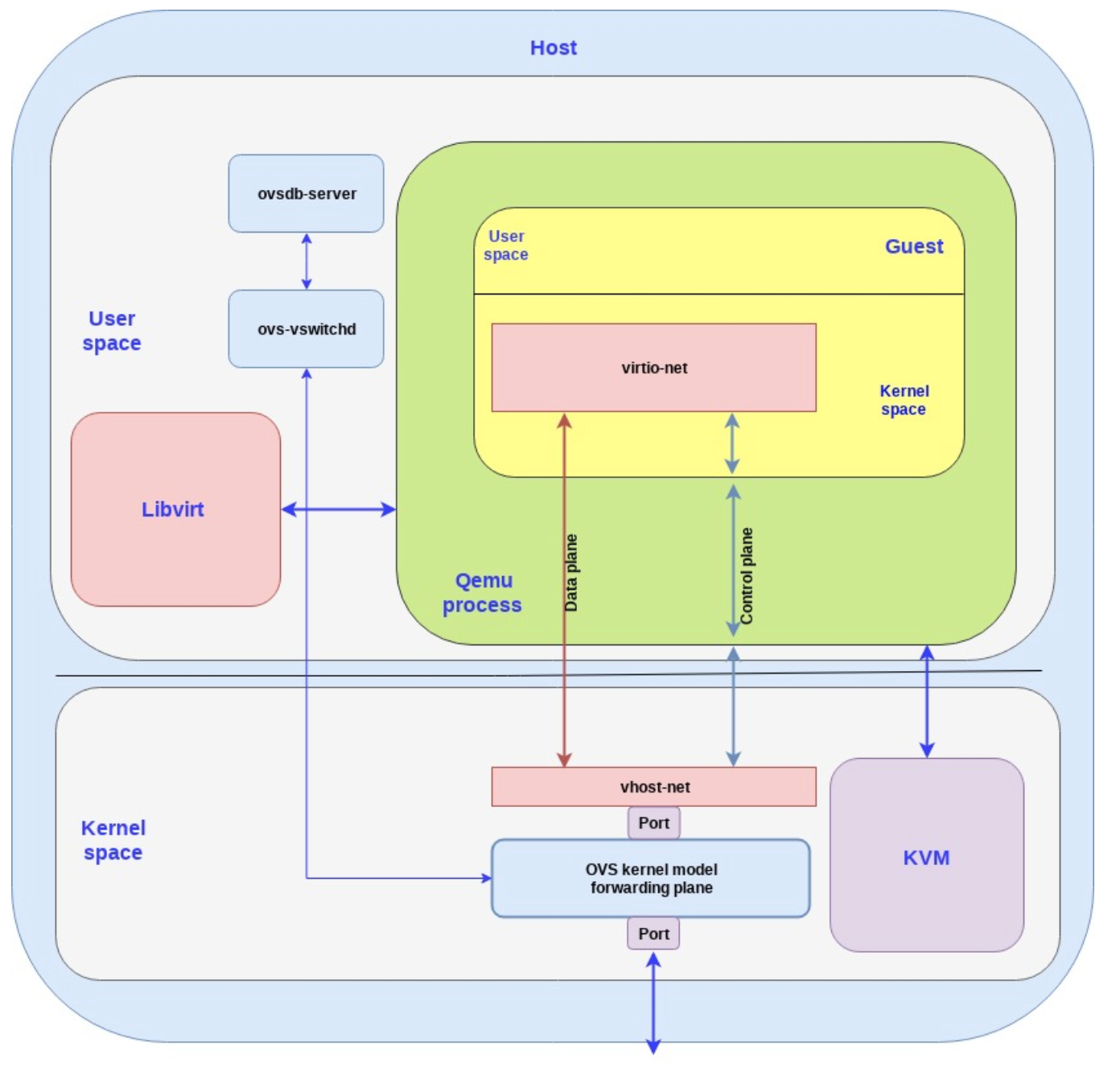 So today (Arp 2, 2020) I came across this VEE’20 Directvisor paper, which is trying to deploy a very thin hypervisor to bare-metal cloud to regain some manageability. The general approach is to reduce VM exit (by disabling the vt-d feature) and try to deliver interrupts to VM directly without VM exit. It talks about the flow of the current timer interrupt and IPI delivery mechanism, I found it useful thus post it here: