To whom it may concern,

Several weeks ago, several community members wrote letters to the Director and Deputy Directors of the Department of Public Safety, the NC Senate oversight committee and the Attorney General’s office alerting them to a serious personnel issue they had discovered in the DPS. As you are now aware, a man named Ronald Kevin Stone is currently employed as a probation officer at the DPS, with multiple cases still under his purview. Mr. Stone has also been identified as the leader of the state chapter of the Sons of Confederate Veterans and linked to multiple extremist hate groups. This sort of conduct is utterly unacceptable by anyone in Mr. Stone’s position. He must be terminated or otherwise relieved of his responsibilities immediately.

A matter as serious as this one does not deserve to be litigated through social media. Thus, this letter will provide multiple examples of documented evidence that Mr. Stone has been unacceptably compromised. Like any person in law enforcement, Mr. Stone relies upon the public trust - including that of communities of color - to perform his duties, which have a major impact on the freedom of others. Through his actions and choices demonstrated here, Mr. Stone has lost that trust.

One: The Sons of Confederate Veterans

The Sons of Confederate Veterans (SCV) is a male-only and effectively all-white organization. It is dedicated to promoting a false and ahistorical narrative of the Confederacy and the Civil War as a struggle for the South’s “liberty and freedom,” rather than over slavery and white supremacy.

The North Carolina Sons of Confederate Veterans (NC-SCV) is not a group of mere alternative historical interest. Rather, the group has increasingly engaged in overt political and social action. One of their more recent initiatives, spearheaded by Mr. Stone himself, has been the effort to raise gigantic Confederate flags in highly visible locations in every county in North Carolina. This is plainly done with the goal of intimidation. The NC-SCV knows full well what the Confederate flag means, both to communities of color in particular as well as to any person who does not share their perverted historical fantasy.

It is no accident nor coincidence that the Confederate flag has been widely adopted by the KKK and other white supremacist groups (even abroad). It is for that very reason that the flag has been widely banned from official displays, including in our own community here in the Triangle (link/link). Again, the intimidation is the point. These people know exactly what the Confederate flag means. 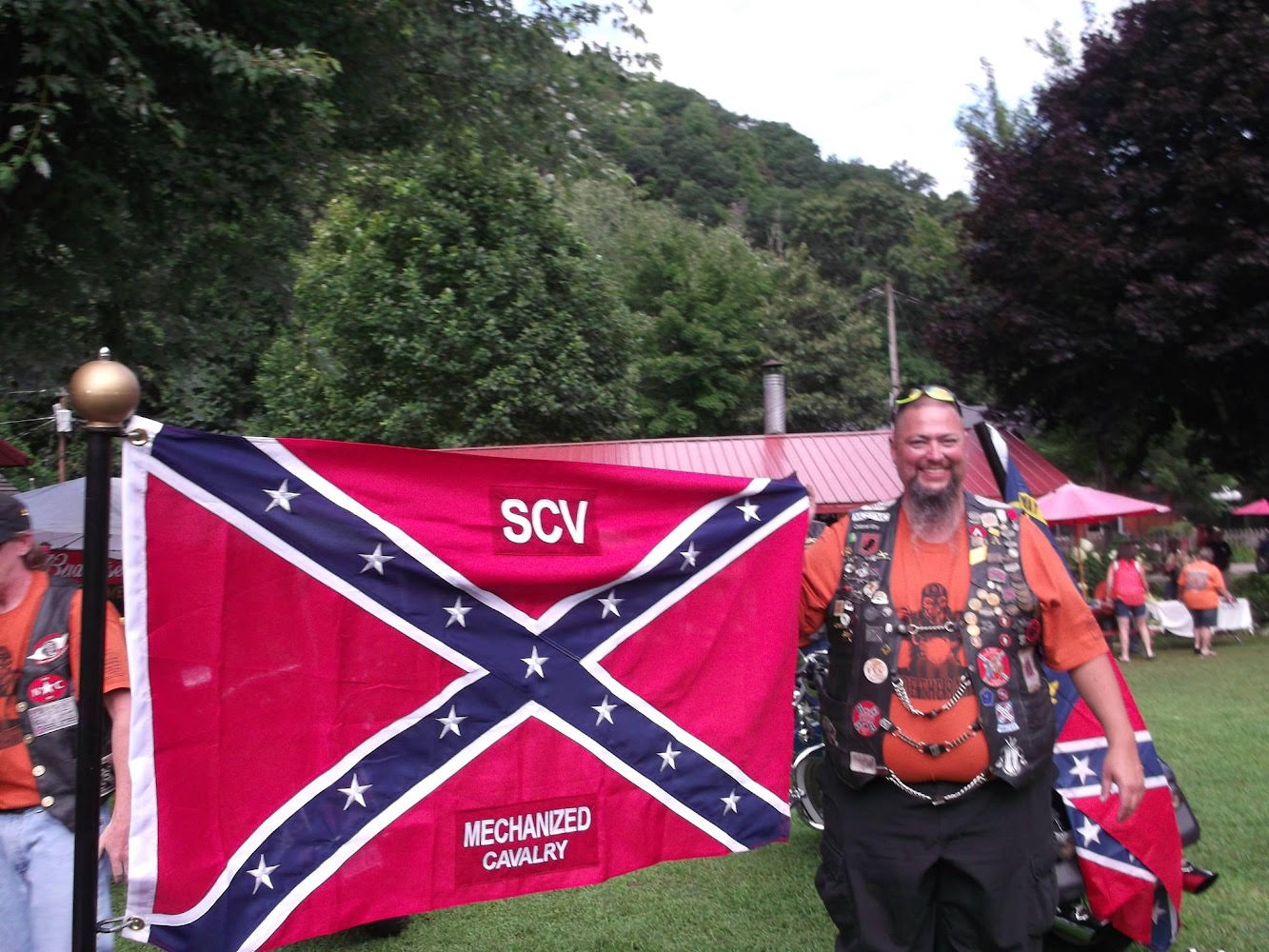 Mr. Stone was elected “commander” of the NC chapter of the SCV in 2016 after serving as “commander” of the group’s “Nathan Bedford Forrest Camp” in Sanford. (Forrest was a Confederate general who also founded the Ku Klux Klan. (More)) Mr. Stone appears regularly at protests and government events in support of protecting Confederate monuments. He also leads the club’s biker gang, details of which follow below in point Four.

Mr. Stone has a troubling history of associating with known white supremacists, including those within the SCV itself.

One good example is his connection with a man named Kirk Lyons. Mr. Lyons is the local chapter head of the NC-SCV in what they call their “Southern Highland Brigade” (effectively several counties in western NC), and was listed as such on the NC-SCV website until they took down the entire staff directory page on the evening of May 21, 2019. (Don’t worry! You can still find the entire NC-SCV officer corps listed in this archived page.) Mr. Lyons is also an avowed white supremacist whose long history has earned him the attention of the Southern Poverty Law Center (SPLC). Please consider Mr. Lyons’ vocal racism and anti-Semitism in this extensive article.

Mr. Lyons has long supported the idea that the Ku Klux Klan, whose goals he has great respect for, “become invisible. Hang the robes and hoods in the cupboard and become an underground organization. This would make the Klan stronger than ever.” (Link)

To that end, here is Mr. Stone and Mr. Lyons attending an event together in 2012. The “Southern Legal Resource Center,” which put on the event, is a legal organization that Mr. Lyons co-founded, and which is considered the “legal arm of the neo-Confederate movement” by the SPLC. (link)

(Mr. Stone is on the far right, with Mr. Lyons directly behind him in the hat.)

Here is the NC-SCV congratulating Mr. Lyons on winning a chapter contest in 2013.

These connections alone are shocking. It is no coincidence that a man whose goal is to help the KKK “go underground” joined the Sons of Confederate Veterans, became a leader within that group, and has cultivated many relationships within it.

A second example arose with the rapid visibility of this organizing effort itself. Within days of press reports of the effort to remove Mr. Stone, prominent neo-Nazi and Shieldwall founder Billy Roper (see his full profile from the SPLC) posted the following in support of Mr. Stone on the Russian social network site VK, which is popular among white extremists. 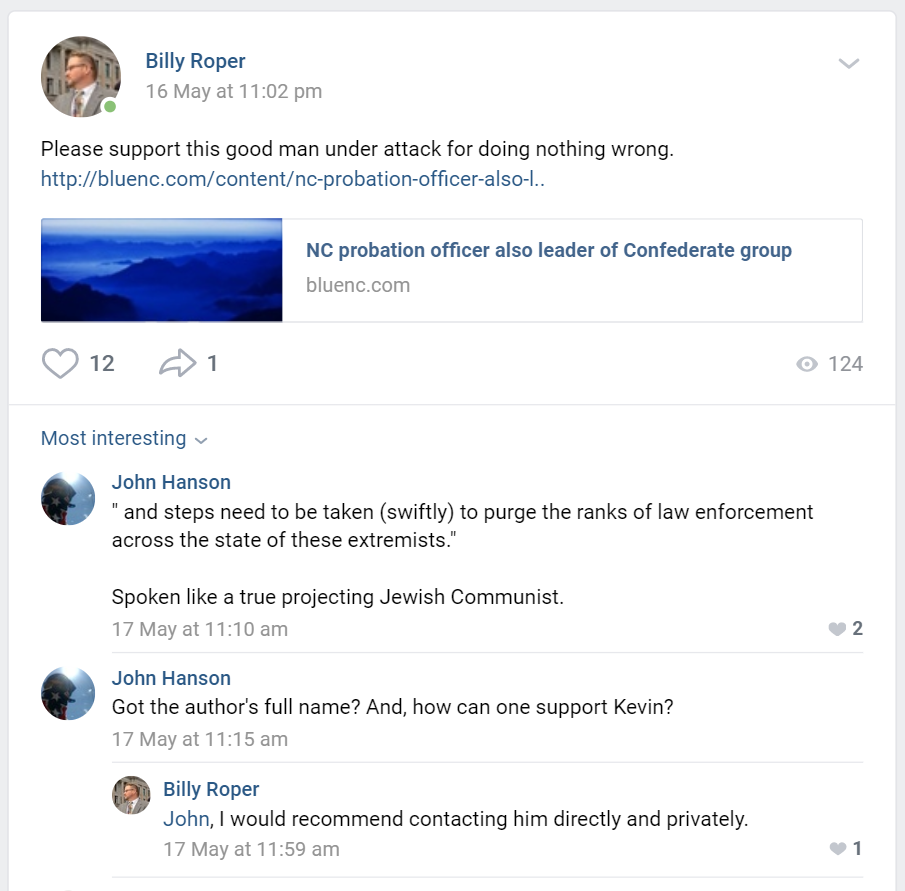 Mr. Stone and Mr. Roper may or may not know each other personally, but their common associations say volumes.

The Shieldwall network is white supremacist group based on the goal of creating a white ethno-state. (Here is the ADL’s excellent summary.) It was founded by Billy Roper, mentioned above. Particularly since the white nationalist rally in Charlottesville in 2017, the group is known for their insignia, a Lambda symbol on a red circular background. 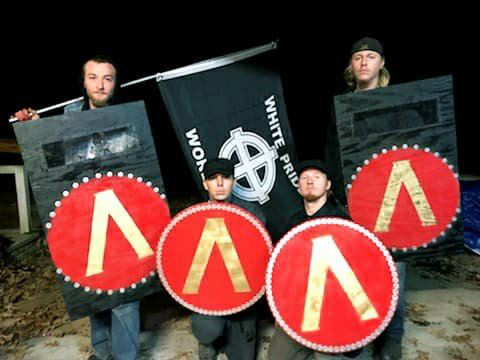 Mr. Stone also wears this insignia while socializing in his position as leader of the SCV. 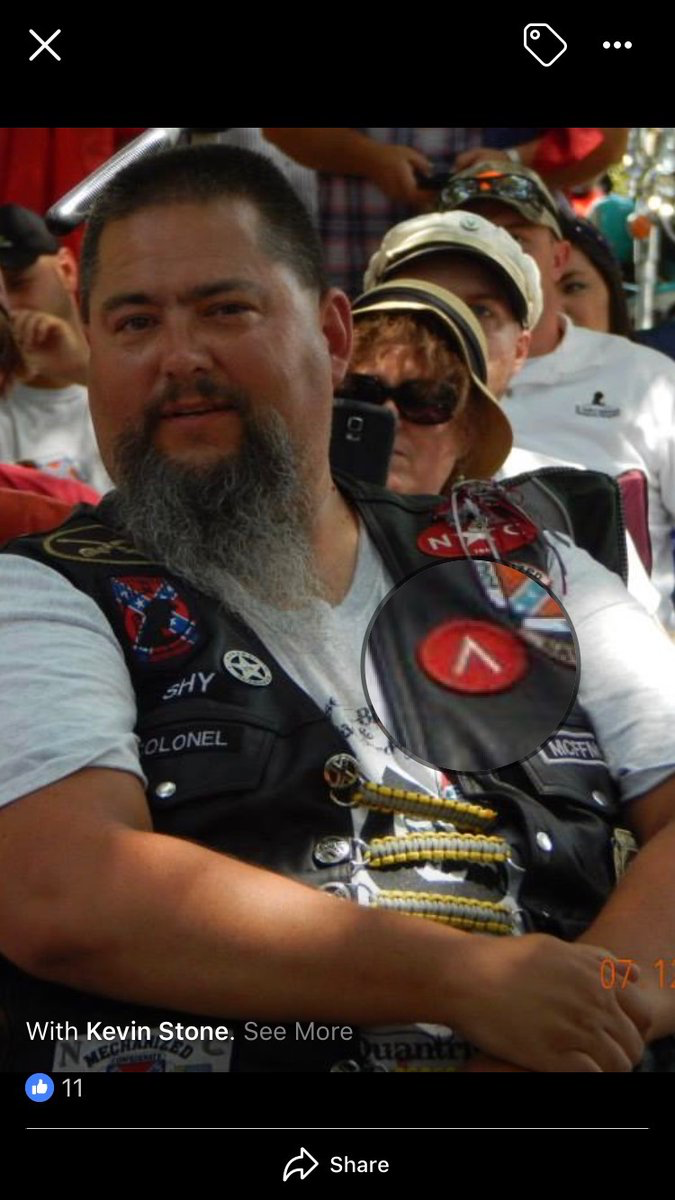 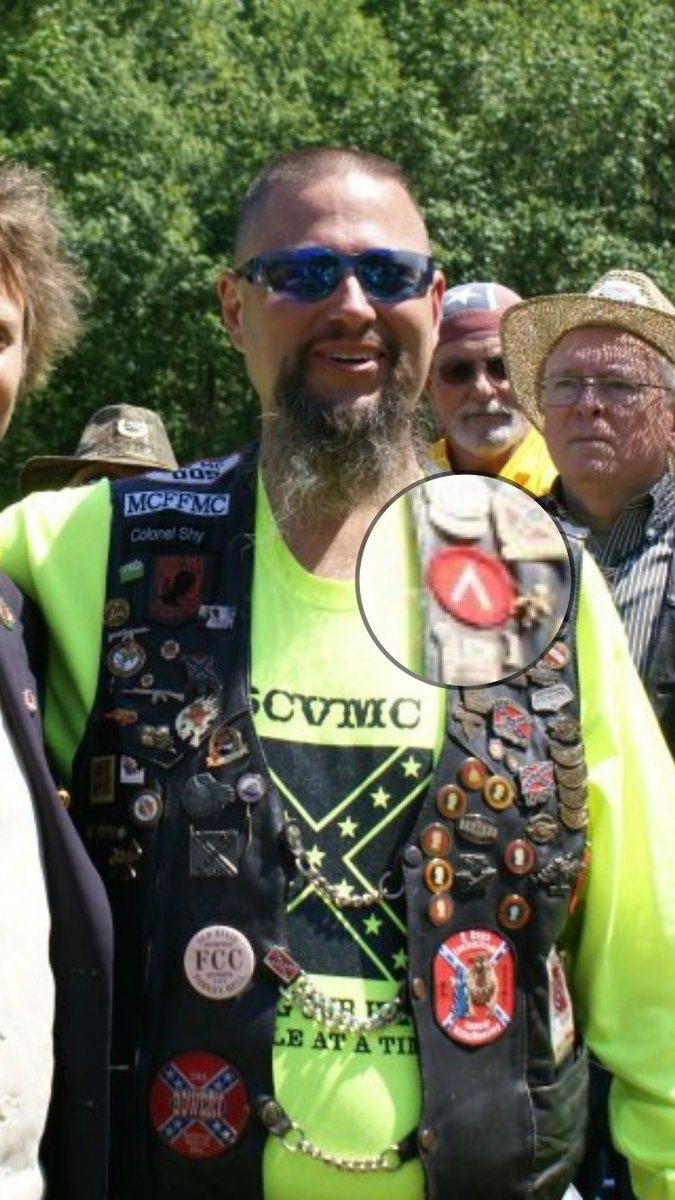 It would be difficult to say definitively that Mr. Stone is a member of the Shieldwall organization solely based on his display of their badge. Nevertheless, it fits squarely within a pattern of deeply troubling behavior.

The national SCV has an interest group of motorcycle enthusiasts within it who call themselves the “Mechanized Cavalry.” As far as biker gangs go, they are generally unremarkable. Mr. Stone also serves as the leader of this group.

In 2017, the SCV’s “Mechanized Cavalry” organized a group that attended a rally in Gettysburg, PA alongside a who’s-who list of extremist and hate groups in the mid-Atlantic. This rally and march garnered wide press attention, and attracted far-right militia groups, the Ku Klux Klan, several state chapters of the Sons of Confederate Veterans and many more, marching shoulder-to-shoulder.

Only days after the Gettysburg rally, Billy Roper (mentioned above) proudly listed the groups that had participated, including the SCV’s Mechanized Cavalry alongside a long list of avowedly racist and hate groups. (See the SPLC’s full report here.)

Five: A pattern of behavior

What we have seen is a pattern of public, not private, behavior. Everything here is publicly available information. Mr. Stone’s behavior has been open for anyone to see for many years.

Mr. Stone is not merely a casual member of a fringe organization that promotes bigotry, hate speech and fosters a community of racism - rather, he is its elected leader. There comes a point at which Mr. Stone’s private affairs cannot help but interfere with his duties as a public official, particularly as one bound by oath to treat citizens fairly and impartially. Mr. Stone is perfectly free to pursue these activities as a private citizen - but not as a law enforcement official employed by the state of North Carolina.

Mr. Stone’s supporters will attempt to deny what is right in front of everyone’s nose. They will say that all of the connections we’ve documented here are innocent coincidences, and that their obvious inferences amount to defamation. They will say there is “no proof” of anything. But this is a diversion.

It is impossible for anyone to prove beyond any doubt that Mr. Stone is “a racist,” and that is not our aim. We cannot read minds. Nevertheless, if Mr. Stone had a Ku Klux Klan tattoo on his arm, there would be little question that he should be dismissed from his position. So given this demonstrated pattern of behavior and associations, what is the difference? If this pattern of behavior is not disqualifying, what is?

Through his own deliberate actions, Mr. Stone has lost the public trust, and thus can no longer discharge his job responsibilities. He must be removed. In the interests of justice, Mr. Stone’s past record should also be carefully examined for evidence of bias against people of color.

We request a prompt and thorough investigation of this matter, as well as why it wasn’t detected and acted upon before.

Tracy Lee, Director of the NC Department of Public Safety

June 13, 2019: Notices about the effort to remove Mr. Stone have reached far and wide around the neo-Confederate white supremacist web. This one, from an organization in Florida, even provides a revealing clarification when asking its members to speak up on Mr. Stone’s behalf. Wonder why?